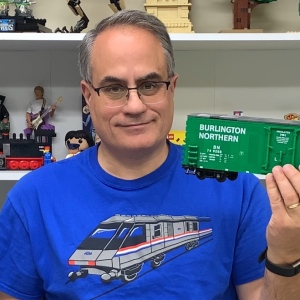 So Thomas has won this round of the Great Race and is champion – for now. I honestly thing both Gordon and Henry are the real fastest. I did not realize it until later but the transformers made by Bachmann are acting very inconsistent. Sometimes the engines would not even move! I am going to make a more reliable and fair course. But who wouldn’t be happy that Thomas won!

Trained as a Physicist - I have worked in telecommunications for the last 18 years as a problem solver and 911 tech. I love trains and LEGO and my YouTube Channels are Train Tsar Fun, BrickTsar, and Jaabo37. Trains is a feature on all of those channels.